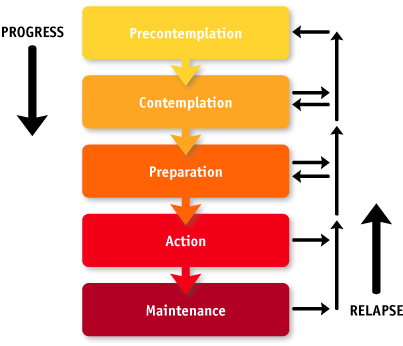 http://www.adultmeducation.com/images/Figure5.png
The constructs of the theory include not only the stages of change, but also the process of change and self-efficacy.

Contemplation (second stage): When people move form pre-contemplation to contemplation it means they recognize  there is a problem and they are starting to think about changing.

Preparation (third stage): Begins once the decision to change the behavior is made.

Action (fourth stage): Once preparation is complete, the action stage begins; this is when the plan is put into action.

Maintenance (final stage): During this stage, people work (and sometimes struggle) to prevent relapsing to the old behavior.

Self-efficacy: It plays a major role in how successful people are in changing their behavior and maintaining the change.